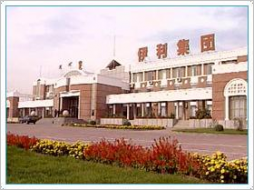 Among the national 520 top industrial enterprises and the 151 top agriculture enterprises, YILI Group is one of the leading processors of dairy products in China with its headquarters located in Jinchuan Development Zone in Hohhot. More than 130 plants in YILI group fall into the 5 businesses units, liquid milk, ice cream, milk powder, sour milk and raw milk. 1000-odd of " YILI" brand products characterized as Islamic have been regarded as Green Food by the China Green Food Development Center, including ice cream, milk powder, milk tea powder, liquid milk and so on. Among them, YILI ice cream has been the No.1 sale in China consecutively for 11 years, and YILI UHT milk has the biggest market share in China, meanwhile, YILI milk powder and milk tea powder's gross sale always stand in the top 3 brand in National Milk Market.

By the end of 2005, YILI Group had been selected "The 500 Top Enterprises in China" for three times. It had also been selected "The 50 Best Potential Public Company of China by China Stock Newspaper--Asia Consulting Company" for seven times. In 2004, YILI is selected one of "The 10 Top Brand of China Market", which only two national brands are selected. According to the authoritative evaluation of "The 500 Top Value Brand in China".

On 16th November 2005, YILI products officially become the formal milk product in 2008 Beijing Olympic Games, so that YILI becomes the first China Food Brand who provides dairy products for the Olympic Games. Beijing Olympic Games will become the new starting point for the YILI's development and is an important milestone of developing strategy of YILI brand. It is the most achievement for China Milk Industry to obtain.

Now that the economic globalization is coming, YILI has taken "humanity, systematization, team work and trust" as its culture, with its creativity, Yili is trying its best to work for people's health, taking the international business strategy, thus making YILI Group become the 20 Top Milk Industry of The world before 2010.